What is a boolean?

A boolean is a variable that is either True or False. We say the datatype of a variable can be booelan.

You can think of it like a light switch, its either on or off. Its based on the smallest unit in a computer, a bit. A bit is a value that is either 0 (False) or 1 (True). You can view a bit as synonym of boolean for now.

In Python you do not need to explicitly data types. To use one, assign a boolean value to a variable.

To define a boolean in Python we simply type:

If you want to set it to on, you would type:

The value of a variable can be shown like so:

You can also type:

which is equivalent to False. Likewise you can write

which is the same as True.

Variables in Python can hold text and numbers. A program can have one or more variables. For instance, the program below creates 3 variables:

In the example above, we have three variables: x, price and word.

These are the variable rules:

Text variables may be defined in 3 ways:

The type depends on what you prefer.

Once defined variables can be replaced or modified:

Python supports the operators +, -, / and * as well as brackets. Variables may be shown on the screen using the print statement.

The first output of the program above is simply the raw value of the variables.

This str() function converts the numeric variable to text.

What is the difference between global and local variables?

We say the scope is global, it can be used in any function or location throughout the code.

In the example below we define a global variable, y amount lines of code later we can still use that variable.

If a variable is declared inside a function or loop, it’s a local variable. Global variables are usually defined at the top of the code.

Global variables are considered a bad practice because functions can have non-obvious behavior. Usually you want to keep functions small, staying within the size of the screen. If variables are declared everywhere throughout the code, it becomes less obvious to what the function does.

A tuple is a collection that cannot be modified.

Variables can be of the datatype tuple. A tuple is defined using parenthesis.

If you want to change the data during program execution, use a list instead of a tuple.

A tuple with one item ( a comma is needed in the end ):

A tuple with multiple items:
Note: Even with one element, the comma is needed.

To access individual elements, we use square brackets. To print the first element (Python starts counting from zero):

To print the second element:

You can access tuples both in the interpreter and during code execution. 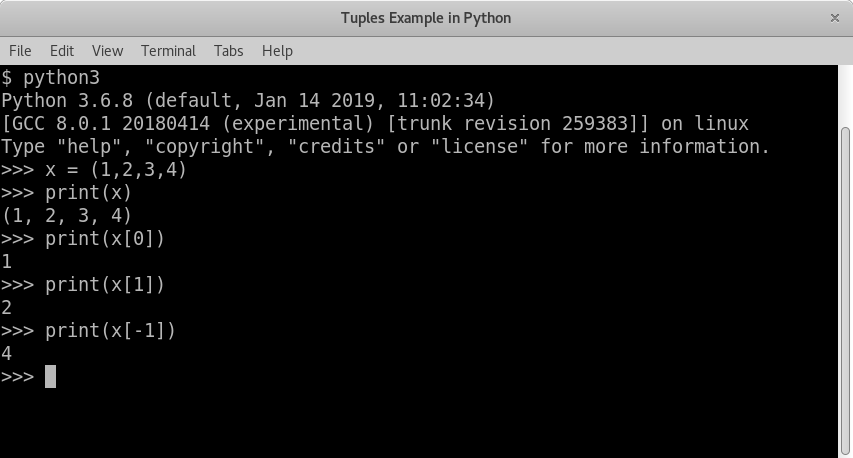 To print the last element, you can count from the back using the minus sign.

A dictionary in Python is a one to one mapping.

Every key points to a value, separated by a colon (:).

The example below creates a dictionary. Keys must be unique values, you can not use the same key twice. Values may or may not be unique.

We defined a dictionary named k and access elements using the square brackets you’ve seen before. We use the key [‘EN’] to print the value ‘English’.

Note: A dictionary has no specific order.

To add a new value to a dictionary you can simply assign a key value pair:

To remove a key/value pair use the del keyword: